He wasn’t even supposed to be on that run.

Jason picked up the load to help a friend with a small firm who was a driver down.  He had been a truck driver for 14 years. 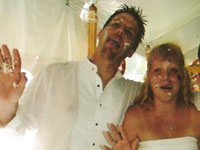 He was a good guy, a family man who adored his son Josh and was looking forward to the birth of his twins.  He and Hope laughed a lot.  His favorite color was blue and he was a sucker for chrome.

Jason was ahead of schedule as he drove toward his delivery in South Carolina. He wasn’t allowed to arrive at the delivery site any earlier than a hour before the designated drop time, so he had to find a place to park overnight.

Another driver had recently parked at the abandoned gas station on I-26 near exit 136.

Jason thought he would be safe.  A man named Wille Pelzer was hanging out at a convenience store across the highway, allegedly looking for someone to rob.  He watched Jason pull in and park.  He crossed over the highway and slid underneath Jason’s trailer, waiting for him to settle down to sleep.

At roughly 10:30 pm that Thursday night, Pelzer shot Jason iin head. Then he took $7.00, Jason’s change from dinner. (In a bizarre coincidence, Pelzer’s mother worked at the diner where Jason ate and had most likely handed Jason his change.) He contacted two other men and told him what he’d done.  They helped hide him and get rid of the gun.  Jason’s body remained in the truck.

By Friday, Hope Rivenburg was frantic.  She couldn’t reach Jason.  He hadn’t delivered his load.  His truck was missing.  The police initially treated her report with skepticism, as if Jason was a wayward husband.  An officer left a voice mail on his cell phone, saying he didn’t care what Jason was doing, but he needed to contact his wife.  Jason had been dead for roughly 12 hours.

A police officer who was a friend of the family got involved.  They started trying to locate Jason’s truck.  His phone went straight to voice mail.  Hope was so scared, but she kept telling herself it had to be okay.

It wasn’t okay and it wouldn’t be okay ever again.  A passing motorist called the police about the truck.  They f

ound Jason’s body and called the friend who owned the truck.  Hope heard the news from him over the phone. Then she had to set about bringing Jason home.

Willie Pelzer was arrested on March 7, 2009, the same day Jason’s body was found.  On March 18th, Hope entered the hospital and gave birth to twins, Logan and Hekikah.

Pelzer’s trial for murder began in November 2009.  In December, Willie Pelzer was convicted and sentenced to life in prison without possibility of parole.  The two men who helped him get rid of the gun received extremely light sentences – outraging many in the trucking industry.

Jason Rivenburg was an ordinary guy who worked hard and loved his family.  What happened to him should never happen to someone else.  Not if we can stop it.